When I first took a computer science course in the 1970s we had a pretest to see what we knew about computers. We were asked "What is an operating system?". In my usual sarcastic style I answered "One that works".

The news today was that Windows 1.0 was announced 25 years ago. It actually shipped in 1985.

I also happened to be going through old backup CDs of mine. I realized that in December I'll have been using Linux as my primary OS for 10 years. This "historic" event happened after I bought a greater than 2GB hard drive and needed to upgrade to Windows 98 which only had been out for a few months at the time. In doing that I found out that the software I had just purchased like MS Money would no longer work and I couldn't upgrade but had to buy a new copy. Being ticked off by Microsoft I tried several versions of Linux and had the most success with Slackware. I was able to dual boot for the times when I had to have Windows.

I've tried several other Linuxes using Mandrake/Mandriva for a long time. Then Suse Linux and now Ubuntu. They were all dual boot systems with Windows until about two years ago when I dedicated one computer to Linux and my older computer to Windows.

For the last 9 months I have been running Linux as a host operating system to several other OSes (including Windows) using Virtualbox. A lot of my files and computing are now in "the cloud".

I'm not sure were this is heading, but seeing that someone is putting virtual OSes on a cellphone means that maybe I can ditch my computer at some point. Though, photo editing with applications like Photoshop need lots of horsepower so who knows.

Been looking for good fiction to make others live by. (see previous post)

Maybe "HitchHiker's Guide to the Galaxy". It would pose great theological dilemmas like "did Zaphod Beeblebrox have an even or odd number of heads?". Much more interesting than that "head of a pin stuff".

Someone recommended Margaret Atwood's "The Handmaiden's Tale". Hmmm, scary but so aren't the usual books of fiction that one is recommended to live by.

Maybe "The Kin of Ata are Waiting for You" by Dorothy Bryant. We would require everyone to sleep in circles with toes touching and feed each other .. or something.

"The Lord of the Rings" now that has the correct militaristic tone and Bilbo saves them all. Now we are talking some serious competition for the usual choices.

Maybe I should pick Proust. Like the traditionally suggested books no one reads him either.

I must have been distracted I missed posting this year on the 10th. It looks as if I will have to come up with something more exciting then an annual post about nothing much.

One year ago today was the last time that I posted to this journal.

So celebrating that remarkable anniversary I thought I would clear up the mystery left one year ago. My photo of the Chatsworth fire had a lot of views in a very short time and I didn't know why. Since then I found that it was linked to by Doc Searls in his weblog at http://doc.weblogs.com/. Well, mystery solved.

Since most all of my photos are processed and published using Linux and Doc Searls is the senior editor of the Linux Journal there is a certain amount of karma in this.

The new mystery is, will I post here again before one year has gone by? 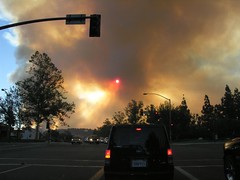 Chatsworth Fire Sunrise
Originally uploaded by photosfromto.
I thought I'd try the posting feature built into my Flickr account. This is a photo of the fires in Chatsworth, CA a few weeks ago.
For some reason I am getting a lot of views on this photo (for me at least) and it is on it's way to becoming the most popular photo on my site.
This was taken from Thousand Oaks, CA approx. 10 miles from the fire.
Collapse